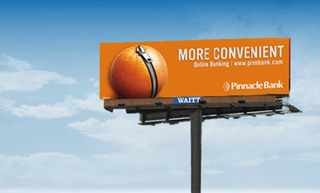 Today we are going to answer a question many people have been asking, are billboards effective advertising? The answer is yes! Billboards are a great way to expand your marketing campaign. Americans spend an average of 20 hours in their cars a week, all the while absorbing roadside billboards. They are visible 24/7 and cannot be turned off or skipped like other media formats. A billboard advertising campaign has a nice return on investment (ROI), increases brand awareness and drives sales.

Billboards generate awareness of your brand and products every time they are seen. As consumers pass your advertisement day after day, they will form a familiar and positive association with your brand. The Arbitron National In-Car Study states that 71 percent of billboard viewers remember the ads they see and 56 percent talk about a funny billboard they saw. To ensure viewer retention of your billboard, create a simple ad that stands out with a clear call to action.

OOH advertising also drives sales. Nearly three-quarters of billboard viewers shop on their way home from work, more than two-thirds make their shopping decisions while in the car, and more than one-third make the decision to stop at the store while on their way home – all times when OOH advertising has the opportunity to be influential. Billboards target your audience when are where they are making shopping choices. With a clear call to action, your billboard can drive online sales or direct consumers right to your door!

The answer to are billboards effective advertising? is a definite yes! Head over to BillboardsIn to get your billboard marketing campaign started!