Minneapolis, one of the Twin Cities, is also known as the "City of Lakes". Directly behind New York City, Minneapolis has the second largest live theatre per capita in the U.S making for a very large opportunity to target the theatre and artistic audience with effectively placed advertisements. Billboards or ads near popular venues like the Mu Performing Arts, Beldam Theatre, and the Minnesota Dance Theatre would get generate high exposure for your business.

Professional sports well established in Minneapolis also form the possibilities for high traffic out-of-home advertisements. Digital signage in the Metrodome, home of the Minnesota Vikings, or Target Field, home of the Minnesota Twins, is a great opportunity which will grow your business. The highways that service Minneapolis also display a chance for effective billboards such as on Interstate 494, Minnesota State Highway 5, or Minnesota State Highway 77. 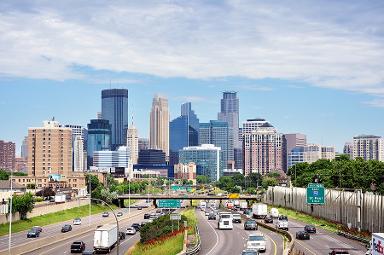 Billboards in Smaller Cities within Minneapolis