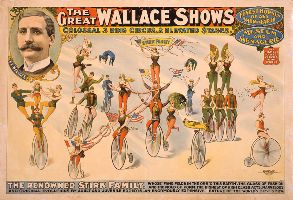 A Brief History of Billboard Advertising

When it comes to pinpointing the first billboard advertisement in history, you may get mixed answers. Some attribute the earliest billboards with the ancient Egyptians as their obelisks communicated government laws and information to its citizens. While this may not truly be the first billboard, this along with other pivotal moments in history helped pave the way for the modernized billboard industry we know today.

Starting in the 1440s, the world saw a big change with Johannes Gutenberg’s invention of the printing press. This allowed for handbills, posters, flyers, pamphlets, and other materials to be produced in large quantities. It wasn’t until the 1790s that we saw Alois Senefelder’s invention of lithography. Using the repulsion of oil and water, this printing process enabled mass production of illustrated posters in color!

With these technological advancements, Jared Bell was able to create what is widely considered the first billboards. These large, 50 square-foot posters were used to promote the Ringling Brothers and Barnum and Bailey’s Circus in New York City in the 1830s. At this time, however, billboard space was not being leased nor were billboards controlled by any laws or standards.

The earliest record of billboards being leased occurred in the 1860s. By the 1870s, roughly 300 small sign-painting and bill posting companies were in operation. The billboard industry was rapidly growing so much that organizations were formed to promote its advancements. In 1891, the Associated Bill Posters’ Association of the US and Canada was formed whose name would later change to the Outdoor Advertising Association of America (OAAA.)
With the 41,000 mile-long interstate highway system created in the 1950s, the billboard industry was booming and perhaps a little bit too much. In 1965, the Highway Beautification Act was signed to maintain scenic beauty along interstate highways by limiting the number of billboards and creating size, lighting, and spacing regulations, among other things.

Today, there are likely over 2 million billboards in the United States including those on local and state roads. Furthermore, the billboard industry continues to spark change and innovation. While we pay tribute to the many “firsts” in billboard history, we’re certainly happy to be past the days of hand-painting signs and moving into the future with digital and interactive billboards.

To search and find billboards across cities like never before, visit BillboardsIn.com