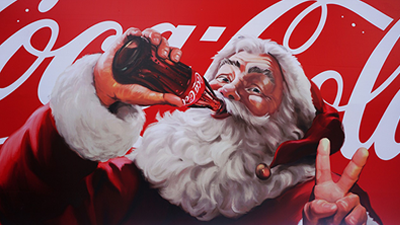 To celebrate the arrival of Christmas in a couple of days, I’ll be exploring some of my favorite Christmas billboards and why they work so well.

The Coca-Cola Company has some of the most iconic Christmas advertisements. Even if their logo isn’t present, people can

most likely tell that the advertisement belongs to Coke just based on the art design. In 1931, the company commissioned an illustrator named Haddon Sundblom to create art that featured Santa enjoying Coca-Cola. It is said that Sundblom actually created the jolly persona of Santa that we know today. For the sake of nostalgia, this has to be on the list.

In the fall of 2020, Disney+ wanted to promote the release of the LEGO Star Wars Holiday Special. This special is not to be confused with the infamous 1978 television film. The billboard shows a LEGO hand piece with a Christmas bow on it. This is a reference to the climatic ending to The Empire Strikes Back involving Luke Skywalker and Darth Vader. Those fairly familiar with Star Wars are able to get the joke, while those who aren’t are at least curious about it.

In the spirit of the Coca-Cola billboard, Dunkin’ Donuts uses Santa Claus to endorse their product. The word choice is perfect and relevant to the holiday season. Location information is also conveyed in a very direct way.

There are bound to be holiday billboards and other out-of-home media in your community, so keep an eye out for any cool designs or messaging.

Keep up to date with our blog for more coverage on the billboard industry.