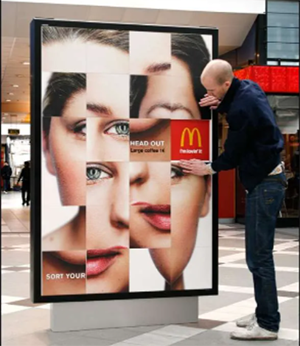 With technological advances, more opportunities have opened up for advertisers to engage with audiences everywhere. In the past, we’ve explored the beauty of traditional advertising, such as wall murals. The truth is that there’s room for both of these advertising mediums to thrive.

In Europe, McDonald’s launched a billboard campaign surrounding their coffee products. Using a board in the middle of a mall, audiences were welcome to solve a fun puzzle by moving pieces around on the board. The completed puzzle shows an eye-catching picture of a beautiful woman with the McDonald’s logo in the bottom right corner. Everyone loves a fun puzzle, and it’s the perfect thing to do at a mall when you might be waiting on someone to finish shopping.

Join the Fight with Daredevil

Upon the release of season 2 of Netflix’s Daredevil, the media company released an ingenious billboard campaign called “Join the Fight” that took interactivity to a whole new level. This all took place in Toronto, Canada. People could use hashtags for their favorite characters (#Daredevil, #Elektra, or #Punisher), and every 48 hours, the character that had the most hashtag mentions would do damage to the other characters’ billboards. This was a great way to hype up the fandom and get people in on the action.

To honor International Women’s Day on March 8, 2015, the advertising company WCRS (now known as Engine) developed an interactive billboard that utilized facial recognition technology. The design shows a bruised woman with the caption, “Look at me. We can stop it.” It’s in reference to domestic violence and how people often turn a blind eye toward it. A sensor on the billboard recognizes when people look at it and the bruises on the woman’s face start to heal and vanish as more people look. The way they use technology to convey their message is so brilliant.

Relax with a KitKat

In Colombia, KitKat had an interactive billboard that would vibrate when people leaned against it. The billboard’s graphic invites people to lean against it and receive a relaxing massage. These boards were placed near bus stops, which is an ideal location to engage with this type of media. This concept, while simple in nature, was actually a trailblazer. According to this article by Ryan Lum, a massaging billboard was never done before.

This last one isn’t a billboard, but I just had to include it because of how creative and unconventional this out-of-home messaging approach was. In Panama City, road conditions were becoming a serious problem. The number of potholes meant certain death for anyone’s tires. To bring awareness to this, Telemetro Reporta, a famous news station in Panama, placed tiny devices in some of the potholes. Whenever these devices were run over, tweets would be sent to the Department of Public Works urging them to address the issue.