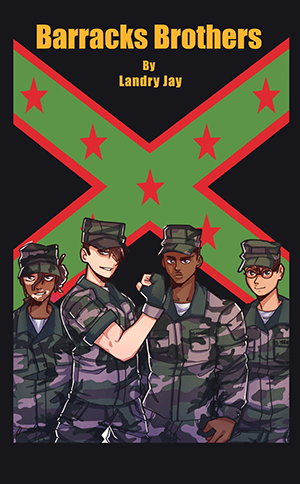 Released earlier this year, Barracks Brothers is a story about three young men and their supplemental Marine Corps training in Biloxi, MS in 2016 written by Landry Jay.

“The story is about evolving, maturing, and overcoming personal anxiety, antiquated thinking, and weakness,” he said. “It also tackles and satirizes a number of issues of American culture.”

The author also said that each character is a caricature of himself and described it as a “parable for humanity.” The protagonists are a big component of what makes the book so unique.

Andre Dixon, a 22-year-old black man from Panama City, Florida has had an office job since finishing college. He has a mild-mannered personality, but can be described as tough, shrewd, insecure, and angry.

“He speaks candidly,” Jay wrote. “His personal beliefs display an agnostic attitude about theology and large skepticism of the status quo.”

“He does not like the ‘homosexual agenda,’ Hollywood fruitcakes, feminist women, or beta males,” he said. “He is uncouth, loud-mouthed, slovenly, yet he has a lot of spirit and is a faithful friend.”

Lastly, Johnny was described as a 20-year-old skinny white man from Pennsylvania. “His upbringing consisted of one which was insular leaving Johnny hopelessly naive in many paradigms of life.”

Jay described him as kind, compassionate, insightful, naive, and aloof. “He is a devout Catholic,—sometimes to a fault—has a brother with Down’s syndrome, and has a strong affinity for anything Star Wars related.”

“The story is an attempt to bridge some expansive cultural gaps,” he said.

The book can be found on Amazon.