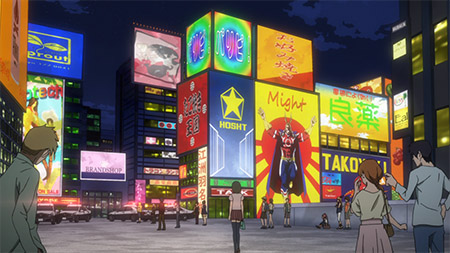 Billboards are used to advertise a wide variety of products, services, and other media, but one of the more fun and exciting categories of billboard advertising is popular culture.

From Soundcloud rappers to Blockbuster films, billboards have been erected to bring more plays, views, and purchases to the media being advertised. But aside from being prominent advertisements in our real lives, they are also often displayed within forms of entertainment.

But aside from just billboard-based plot, plenty of pieces of popular culture have displayed billboards in the background.

We’ve already written about billboards in videogames, but OOH advertising is shown in plenty of other forms of media, as well.

For example, one of the most impressive aspects of the Japanese anime film Ghost in the Shell (1995) is the stunning cityscapes which are abundant with OOH signage.

Other Japanese anime feature billboards in their more traditional forms, like this downtown area of Ganymede in Cowboy Bebop, or, in the My Hero Academia universe, Esuha City.

Billboards make appearances in live-action series as well, and they often seem to be featured to add to the atmosphere. For example, in Glee, the New Directions take a trip to New York City for a competition, and many of their downtown scenes very prominently feature digital ads in Times Square.

There are even novels about billboards, like Billboard Man by Jim Fusilli and The Billboard by V.E. Suárez.

While many people may not think about billboard advertisements very often, it is clear that at this point, they’ve become a part of our lives as modern members of society: they exist in both our real lives, and in our forms of entertainment.