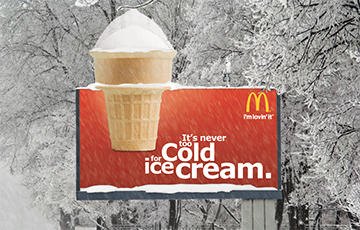 The greatness of this billboard explains itself. On July 7th, 2019, the United States women’s national soccer team won their fourth overall World Cup championship and their second in a row. This accomplishment is another example of why the USWNT has been the most dominant team in women’s World Cup history. This accomplishment did not go unnoticed and Lamar Advertising wanted in on the action. By placing this celebratory billboard in Oklahoma City, Lamar reminds us of this historic accomplishment.

This billboard shows us how clever marketing can go a long way. Burger King takes advantage of the placement of this billboard using the slogan “Always On Top” with a billboard that is literally on top of a McDonalds! Since McDonald’s does not own the billboard space, this ad will stay up for however long the campaign has been paid for. This guerilla marketing technique was good enough to be shared on social media by an audience which boosts the ad’s effectiveness at no charge to Burger King.

I know how this guy feels! Yet another great use of outdoor by Tylenol. #billboards #creativeadvertising #OOH #outdooradvertising pic.twitter.com/5YxRsSkf7o

Check out the clever use of snow in this McDonalds #billboard #ad . Very #clever! Stay warm today folks! pic.twitter.com/hi8ty8XJyh

Have you ever considered putting mother nature on your marketing team? Well, McDonald’s did with this ice cream billboard in Sweden. Sweden is notoriously cold and in the winter months, even more so. McDonald’s took advantage of the snowfall and decided to advertise their ice cream using snow to fill up the cone. This clever trick caught the attention of the media and was shared all around the world, further broadening the reach of the billboard ad.

If any of these great billboard ads sparked your interest, you can head over to BillboardsIn to begin your own billboard ad campaign today!